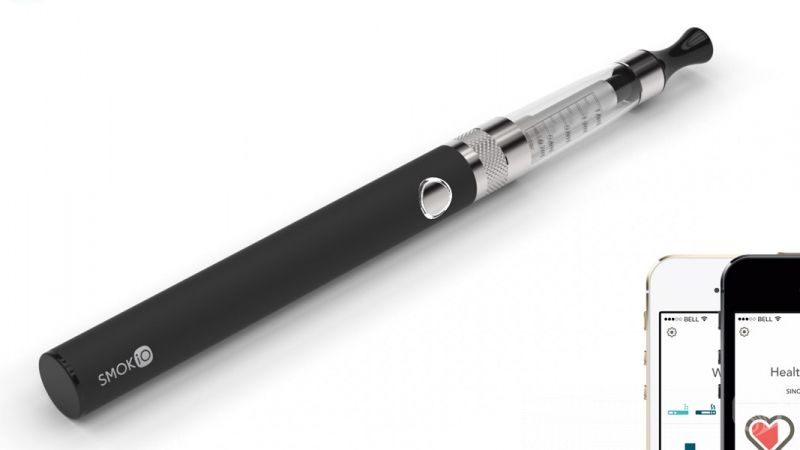 The electronic cigarette industry is fast growing and in constant development and since it is the best alternative to tobacco smoking, itâ€™s mostly used by people trying to quit. For the last years there were rumors and users talking about the idea of an ecigarette that is capable of connectingÂ  to modern smart phones or tablets in order to keep track of its use and the benefits it has on your body so it was an imminent product to appear on the market.Â â€œThe worldâ€™s first connected electronic cigaretteâ€ called Smokio was developed in July 2013, in Paris, France, by a group of young tech lovers who knew â€œa simple or small twist can have a tremendous impactâ€. Smokio has a small built-in chip that is able to connect to your smartphone or tablet via Bluetooth and to synchronize all the data it keeps track of.

Smokio records when and where you vape, how many puffs you take and the status of the 900mAh battery. It can only synchronize with smartphones and tablets equipped with Bluetooth Smart and it is currently compatible with only the most popular devices on the market â€“ iPhone 4S, iPhone 5, iPhone 5C, iPhone 5S, iPad 3 and higher, iPad Mini, Samsung Galaxy SIII and S4.

Smokio users can download the app. for both iOS and Android and after installing it on their smartphone or tablet they will have access to a lot of useful information. Besides the recorded data from the ecigarette, the app can also calculate the number of tobacco cigarettes you have avoided and how much of your health you have recovered since you made the switch.

Through the app you also have the ability of fine tuning the vapor volume, monitor the battery level and find out how much money you save by using your ecig.

When it comes to using your ecigarette, you just have to screw on the tank that you filled up with ejuice and then to power on the battery like you would do with any similar device. Once itâ€™s on, you have to download the app on your device and get them connected. It only takes seconds and you donâ€™t even have to keep your ecig close to your handheld at all times. The ecig has an internal memory and it needs to synchronize with the app once every few days. The connection is wireless and it occurs automatically, the only requirement being that your Smokio is in the 10m range of the Bluetooth.

The Smokio comes in a starter kit that contains the 900mAh battery, two tanks, a USB adapter and a bottle of e-juice with 0 nicotine. Unfortunately itâ€™s not yet available for purchase as its developers are getting ready to lunch a founding campaign on Kickstarter so be sure to check it out. According official site, the device will be ready for sale in February 2014, at a price of $110.