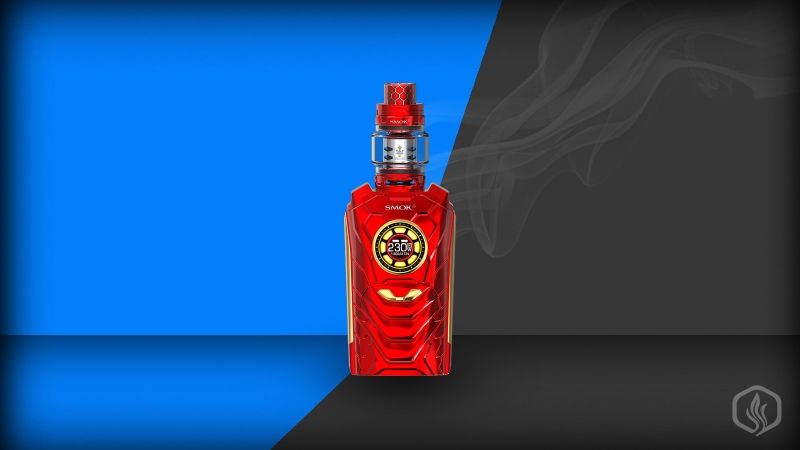 If you're curious how future mods would look like, then the SMOK I-PRIV 230W kit is a good place to start. This dual 21700 device comes with voice control and so many customizations. It includes the popular TFV12 Prince Sub Ohm tank, as well as the new strip and mesh coil heads. The menu system and user interface have been completely redesigned and the overall build quality is quite impressive.

New Strip and Mesh coils for the Prince tank

What you get with the I-PRIV kit

Like many SMOK products we recently reviewed the I-PRIV comes with an USB cable, the TFV 12 Prince sub ohm tank, a bag of spares and the user manual. There are two types of coils: the 0.15 ohm Strip atomizer head and the 0.15 ohm Mesh atomizer head as well as an extra glass section.

Available colors are: Purple, Green, Chrome, Blue, Gold, Red, Black, and Rainbow. Even so, we mostly recommend Red and Black since these are the only colors that match the Iron Man theme.

Design and features of the smart I-PRIV

The SMOK I-PRIV 230W is definitely one of those 'Love it or Hate it' starter kits. We can tell you right from the start it's not a device for everyone. It's close to miniature body armor and it's pretty bulky. The build quality is really outstanding and the mod doesn't rattle but it's clearly not a winner in terms of looks.

It measures 96mm x 56mm x 35mm and weighs around 190 grams without batteries. However, despite its generous depth, it will only accommodate atomizers up to 26mm in diameter without overhang. This is mostly due to the design and the two side horns.

We have the spring loaded 510 connector on top, and the display and adjustment buttons on the face of the mod. The fire button is actually a fire bar and it's placed on the side. On the bottom there's an LED flashlight as well as the micro-USB port.

To access the battery compartment on the SMOK I-PRIV 230W you will need to place your finger in the groove at the base. Then pull out the panel, which is held in place by powerful magnets. This mod works with two 21700, 20700 or 18650 cells and there's a neat adapter you get with the kit.

The user interface and voice control

The user interface and menu system have been completely re-designed on the I-PRIV. And while we really like the UI, we can't say the same about the menu. It feels a bit tricky to accommodate to, and not that intuitive.

The features variable wattage between 1 â€“ 230W, as well as temperature control, TCR and pre-heat functionality. There are presets for Nickel, Titanium and Stainless Steel and it will fire down to 0.05 Ohms in TC mode.

One of the most important features of the SMOK I-PRIV 230W is voice control. Here is where the device absolutely shines and everything works as expected. It's very responsive and kind of fun to play with. You start with the command code "Hello I-PRIV" to activate the feature and then use the list provided in the menu for various controls. You can adjust the wattage, lock or unlock the device, turn the flashlight on or off and even change screen color.

The Prince tank and the new coils

I know we covered the TFV12 Prince tank in previous SMOK reviews, like the one for the MAG kit. However the company has released two new types of atomizers and these are definitely worth checking out Both the Strip and Mesh coils are very well engineered and they really enhance flavor. We recommend 50 â€“ 60W for best results.

Performance and final words on the I-PRIV vape

The SMOK I-PRIV 230W starter kit is well built, packed with features and quite futuristic. The voice control option works surprising well, there's an LED flashlight on the base and the device takes two 21700, 20700 or 18650 batteries. It's a great device for intermediate vapers and the news Prince coils do an amazing job at enhancing flavor. Don't expect this to be a great vape for clouds instead expect a uniquely designed box mod with a great vaping range and voice control.

When it comes to cons we need to mention the design and the overall usefulness of the voice commands. Sure, they work really well but without an AI to interact with the user it becomes rather boring after a couple of days. It's a good thing you can turn it off completely.

Rating of the Smok I Priv 230w Starter Kit 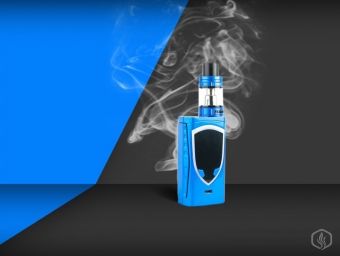 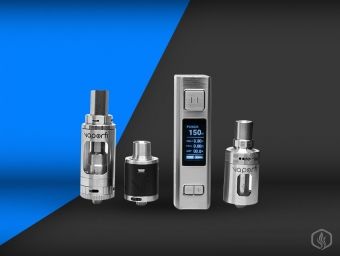