Power curves and temperature curves explained - why are they important 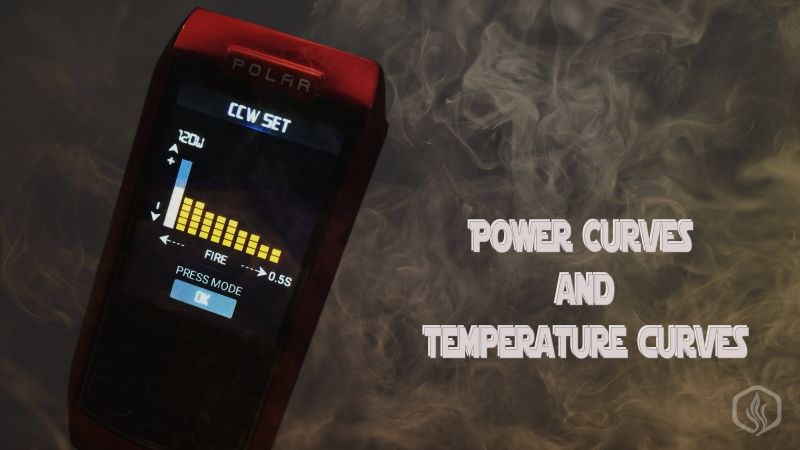 Many of today's advanced mods offer a feature referred to as power curves. It may have different names like CCW or VW Curve, depending on device and manufacturer, but it essentially does the same thing. And because we consider it to be an important feature we are going to explain what it is, how to use it and why it's different from standard preheat profiles.

What is power curves and why it's so important?

Power curves is an advanced pre-heat feature offered by some of today's high end box mods. It allows precise control over the first 5 or 10 seconds of vaping. This means you can individually adjust the power hitting the coil in 0.5 or 1.0 second increments for a 5-second or 10-second interval. Similar the vertical faders on a stereo graphic equalizer, power curves lets you customize your vaping experience to the last detail.

Let's say you enjoy vaping at 45W. This is your sweet spot for flavor and vapor production. When using your mod in standard power mode or variable wattage mode, a value of 45W means it will hit the coil with the same power all throughout the usual 5-second inhale.

Unfortunately not all coils are the same; therefore some builds get hot a lot slower or faster. A dual Clapton build with high ramp up times will take longer to heat up than a standard micro-coil. This means that in the usual 5-second draw, the user experiences the build's full potential only for around 2s. The first 3 seconds were "wasted" trying to bring the coil to temperature.

Now let's imagine we subject the same coil to 90W instead of 45W. It will definitely get to temperature a lot faster since the higher wattage will compensate for the slow ramp up time. But vaping at 90W is not the same as 45W, with much warmer vapor and bigger clouds.

This is where power curves feature comes in handy.

How to use power curves

By setting the first half second for 90W and then gradually decreasing the power to 75-60-50W and finally 45W for the last two seconds you can take advantage of constant vapor production all throughout the inhale.

This is particularly useful when using coils and builds with slow ramp up times. Or you can also use it with standard coils and gradually decrease the power for the final seconds of the inhale.

The beauty of it is that you can customize the experience any way you like and this has a dramatic effect on the overall vapor production and flavor.

Most advanced box mods that offer power curves also offer temperature curves. The feature is similar, only it uses temperature values instead of watts. This way you can customize the 5 or 10 second interval in 0.5 or 1-second incremental temperatures.

You can start off with a higher temperature like 550F and gradually decrease it to your preferred setting. It ensures a more consistent overall experience and one that has been tailored to your liking.

The only thing to keep in mind is that temperature curves only works with coils that are temp control compatible temperature control. This includes atomizer and wires made from Nickel, Titanium, and Stainless Steel.