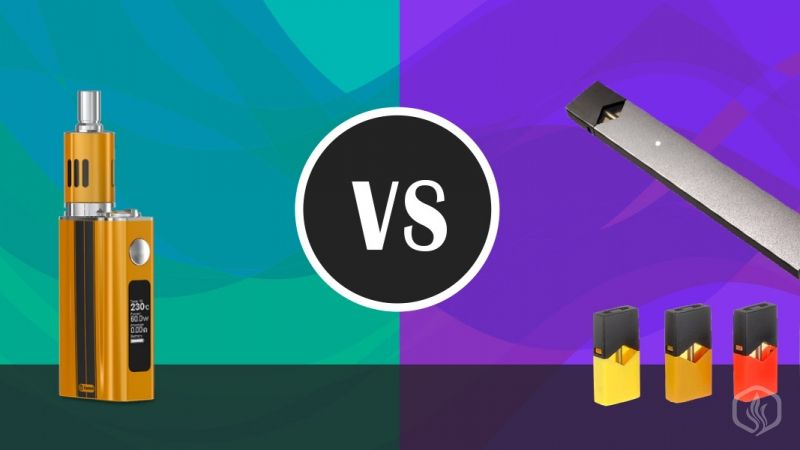 There are tens if not hundreds of thousands of vape products on the market and understanding their functionality is important, especially for beginners. These devices usually fall into one of these two categories: open system or closed system vaporizers.

Some have been around since the beginning, others have emerged as a result of regulations but the main idea is that they all do the same thing. Using electricity from a battery, they heat up a coil and transform the e-liquid into clouds of vapor.

Open system vaporizers are the most popular

Without a doubt, open system vaporizers are the most popular out there. More than 95% of the products we've talked about are open system vaporizers. These include the vaping pen, box mods, rebuildable atomizers and tanks. You can replace coils, refill with e-liquid and use the same tank or atomizer on several mods. They are extremely versatile and millions of vapers worldwide use them every day.

Open system vaporizers vary from simple mouth to lung vape pens to 300W box mods and powerful sub ohm tanks with up to 8 coils in a single atomizer head. They work with either built-in or removable batteries and they generally use the same 510 connector for the atomizer. State of the art mods like the SX Mini Q Mini and top quality RTAs like the Kayfun 5 from Svoemesto account for a stellar vaping experience.

Versatility, Power and full control over your vaping experience

With open system vaporizers you can achieve good performance even with cheaper mods and tanks. Users can adjust the wattage or voltage to their own linking, replace coils with different resistances and even build their own.

With so much control over the vapor, nicotine concentration and flavor it's no surprise open system vaporizers dominate the industry.

What are "closed system vaporizers" exactly?

Closed system vaporizers on the other hand are vape products which use refillable or non-refillable pods or cartridges. These have a precise amount of e-liquid and a precise nicotine concentration, finely tuned to deliver the same vaping experience with every single puff.

Most of the time you cannot use cartridges or pods from other brands and the nicotine levels as well as flavors are limited.

Pod vape systems are rather similar to the original two piece e-cigarettes in terms of functionality. Some have emerged to comply with recent regulations while others to offer vapers a fuss-free alternative. Don't think that all people enjoy refilling tanks with e-liquid, dealing with constant leak problems and replacing atomizer heads.

This is where closed system vaporizers come to make their lives a lot easier. You simply slide the pod in, inhale and enjoy. Once it's depleted just replace it with another. Battery running low? Simply plug it in and it's full in less than an hour.

No leaks, no fuss, no refills

You do get a few options with this one and the overall quality is pretty good if you're a current smoker. Battery life is decent and vapor production and throat hit are similar to a tobacco cigarette.

The JUUL pod vape from Pax Labs is another fully closed system vaporizer and this one is perfect for beginners. Despite the limited choice of flavors and only one 50mg nicotine concentration, this particular device does an excellent job at delivering a satisfying vape.

It's automatically activated each time you take a puff and it's so simple to use. And contrary to popular belief the cost of pod mods is not that high compared to other products.

Other closed system vaporizers worth mentioning are the MY. from Von Erl, the MyJet from Wismec, the CYNC from Vape Forward and the Mistic 2.0 from Mistic Ecigs.