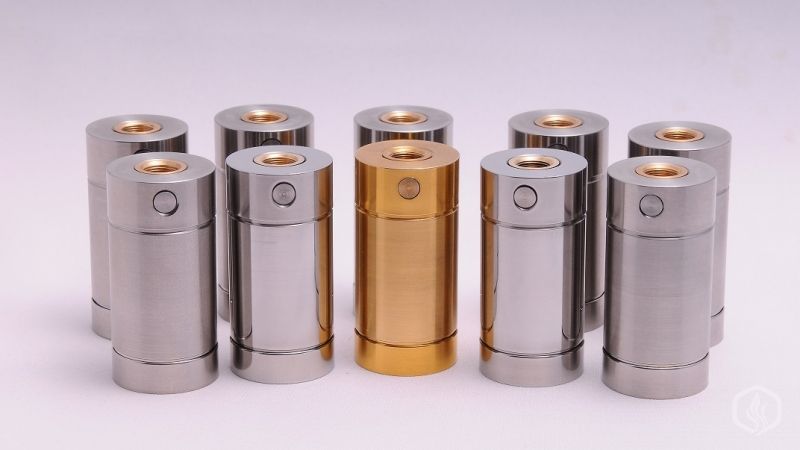 Mechanical mods, advanced personal vaporizers and other mod vapes are slowly taking over the cig-a-like and eGo models and more users make the switch to these powerful devices each month. Iâ€™m sure not everyone fancies big, bulky e-cigarettes but if youâ€™re browsing the internet for your first, then let us help you out.

First of all you need to understand that mechanical mods are called this way because they lack any type of electronic circuitry or regulators. This means that the only thing they depend on is the battery you put inside of them. Depending on the case, some are telescopic and work with different types of batteries, other have a fixed length and only work with a certain type of batteries.

Batteries come in different shapes and sizes, but when referring to mechanical mods there are a few that have become very popular. The 18350, the 18500 and the 18650 are some of the best-known battery types that are commonly powering a huge percent of all mechanical mods out there, alongside the 26650 battery that became popular in the past year. While the first three have roughly the same diameter but vary in length, the 26650 models are much wider and only a few mods can house them. One of the most popular 26650 mod is probably the â€œHadesâ€, but considering the over $200 price range, itâ€™s not very affordable and usually a beginner doesnâ€™t want to spend so much money on a single piece of metal.

If you plan to use different types of batteries and you have some already lying around the house, then a good choice would be a telescopic mod. Some telescopic mods are made from tubes that can be added or removed, others work by screwing or unscrewing the two parts that make up the body and thus are able to vary in length. Other mods have a fixed length and work with only one type of battery. The most common is the 18650, but weâ€™ve seen many models that work great with 18350 types. The idea is that the bigger the battery, the more power itâ€™s able to deliver and depending on the case youâ€™ll be able to puff out more vapor or have a greater autonomy. Usually when using 18350 batteries itâ€™s great to have a few ready to swap once they are depleted because they run out only after 2 or 3 hours of intense vaping.

Some mechanical mods have the firing pin at the bottom, others have it on the side, some are magnetic, and others are spring powered. Usually magnetic connections are smoother and longer lasting than the regular spring types but thatâ€™s not always a guarantee. Another thing to keep in mind is that your mod needs to have a safety mechanism in order to prevent it from firing once itâ€™s inside your pocket or bag. Most bottom firing models have a reverse threaded locking ring that can be screwed in order to securely block the firing button.

Decent mechanicals can be found around the $50 price range, and are really worth the buck. There are also a lot of clones of more expensive devices but these have low quality threading and connections but there are some exceptions as well.