The 11 Most Popular Vape Youtubers - Our top favorite vaping vloggers 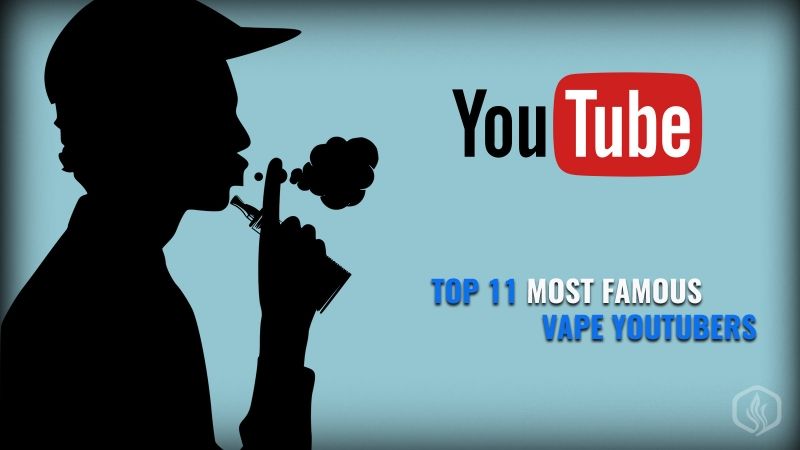 We all read reviews and browse through the biggest online communities when it comes to buying a new product, however nothing beats the most popular vape Youtubers. With hundreds of thousands and even millions of subscribers these internet personalities are the pinnacle for the latest and greatest additions from the vaping market.

If a device has just been launched or it is in its final beta testing stages, chances are you will find it listed on the channels of these famous vaping vloggers.

Why are vaping youtubers so popular nowadays?

Vaping is a community and like most other communities there are multiple platforms where people come to share information. Since YouTube has been steadily growing for years and users can monetize their content, itâ€™s no surprise that vlogging is a full time job for many. And while the actual money from views might not be enough to make ends meat, the platform is a great opportunity for publicity deals and sponsorship from different brands.

Watching a video review is pretty straightforward and this is why itâ€™s preferred by so many people. You get to witness an experienced vaper in action who presents everything about the device, compares it to other products and shows its pros and cons. And since you see the vape with your own eyes you can assess its size, functionality and how it will suit your needs. This is a much more in-depth experience than having to read a review and imagine all these things.

Will the trend ever stop?

This is truly hard to say. People love to watch, to like, comment and follow and this makes the platform even more popular. But given the recent events it is expected that Youtube will become even more restrictive when it comes to vaping related content. We are not sure if the fate of these videos is completely sealed, however things are not looking too positive for the moment.

Who are the 11 most popular vaping Youtubers?

Jai Haze is a popular vape Youtuber based in the United States. He is often referred to as the Simon Cowell or Howard Stern of vaping because of his blunt approach. His videos are very entertaining and packed with information. Mr Haze reached 177K subscribers by December 2019 and has a total of 45,866,225 views. He joined the platform in June, 2014.

DJLsb Vapes is one of the most tech savvy vaping Youtubers out there. Danielâ€™s reviews are very in depth and very appreciated by the community. He has been collaborating with different companies to beta test and improve their products. He has a subscriber base of 212K and his videos have summed up 31,407,572 views. He is an active vlogger on the platform since October 2013.

Alex from VapersMD is a Russian vaping Youtuber from Moldova. He is incredibly popular and despite having just 260K subscribers, his videos have gathered a total of 67,964,628 views. He joined the platform back in September 2014 and he has been active ever since.

Matt From SMM is one of the most charismatic vaping vloggers on Youtube. He started the channel â€œSuck My Modâ€ back in February 2014 and he has been growing every since. Matt usually does videos alongside his wife Vanessa, who is also a passionate vaper. He has 289K subscribers, 51,638,235 views and he is also very active as an advocate for e-cigarettes.

Mike Vapes is yet another popular Youtuber thatâ€™s passionate about vape gear. His mellow personality and detailed reviews have earned Mike 313K subscribers and up to 70,819,900 views. He puts out several videos each week and he loves testing the latest and greatest vapes.

LifewithTwisted or Vaping With Twisted 420 is another Youtube vape channel that has become increasingly popular across the years. Since its debut on the platform back in June 2013, Twisted managed to get 376K subscribers and 56,486,789 views. He is one of the funniest guys out there and his videos are both informative and a pleasure to watch due to his goofy sense of humor.

DashVapes is a different type of Youtube channel. They take their name from the famous Canadian retailer and distributor of vape gear and thy try to do informative videos and tackle headlines. They have 385K subscribers so far as well as 62,486,194 views, which shows they are doing an incredible job.

GrimmGreen is one of the veterans of the Youtube vapers community. He has been doing ecig videos since 2009 and he is also known for his advocacy work. With almost 400K subscribers and over 75,510,636 views he is the go-to guy for rebuildable atomizers, sub-ohming and flavor chasing.

Zophie Vapes is a female Youtbe vaper who has witnessed a huge spike in followers and views in the past year. She has just surpassed the 400K milestone and looks like sheâ€™s not stopping here. With over 50,609,727 views and lots of engagement on all of her videos it seems she deserves the title Queen of Vaping.
The entertainment offered is of better quality. The graphics and sound quality are impeccable which will give you a real desire to continue playing whenever you want. There are even latest novelties such as the game with the live real dealer. In addition, several casino refuse to pay your winnings, with True Blue casino you are on one of the most reliable casino games. You dont have to worry about your money because True Blue vegas casino online promotes everything from deposit to withdrawal of your winnings which is the ultimate goal of the game. We can not fail to mention several bonuses and promotions for all players: the sign-up bonus, the loyalty club, progressive jackpots and many more are waiting for you. If you are from Australia, choose The Casino True Blue for the wonderful gaming experience. Download Now your favorite games from the official website of True Blue casino, win and blow up the bank.

IndoorSmokers is one of the most entertaining vape channels on Youtube. Famous for his way of addressing the viewers: Vapestas, Chris does everything from reviews to unboxings and advocacy. He has 586K subscribers and that number is clearly not going to stop very soon. His videos have over 107,292,719 views and her has a separate channel for weed related products.

Rip Trippers is by far the most controversial and popular vape Youtuber out there. He is very charismatic and knows how to entertain his audience. He is the only one on our list to get pass the 1 million subscriber milestone and he is definitely not stopping here. His videos cover a wide range of topics from reviews to tutorials and advocacy. He is famous for his ending line: â€œSmoking is dead, vaping is the future, the future is now!â€. Ripâ€™s videos have gathered a whopping 251,363,996 views so far.